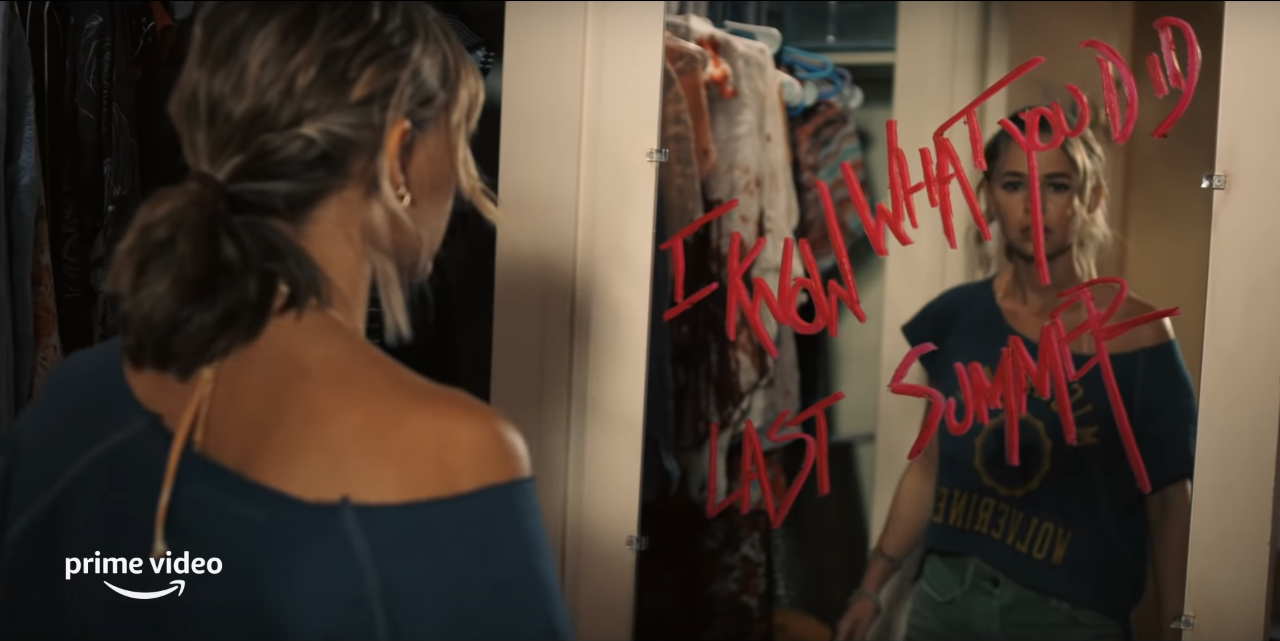 The run of teen slashers continues with “I Know What You Did Last Summer,” a sexy reboot of the middling 90’s film franchise of the same name. The first half of the Amazon Prime’s eight-episode series throws us into the same type of “secret world of teens” that we’ve seen countless times before in shows like “Euphoria” and “Skins,” but this time we get some murder for added spice. Creator Sara Goodman brings the teen intrigue that we’d expect from a “Gossip Girl” vet, but genre confusion spoils the few interesting ideas at the heart of this story.

When “last summer” begins, the teens of Wai Huna, HA, are drinking away one of their final nights before college at a pulsing house party. Twins Allison and Lennon (Madison Iseman) look identical, but that’s about where their similarities end. The school it-girl, Lennon floats effortlessly around the dance floor, flashing a battering ram of a smile at her many admirers. Allison, though, isn’t comfortable in the skin that her sister wears so well. She’s unpopular, a poor student and clueless about how to seduce her longtime crush Dylan (Ezekiel Goodman). Lennon initially offers her some advice but then decides to sleep with Dylan instead, crushing her sister.

Allison tries to flee the party but gets mistaken for Lennon by a pack of the latter’s friends, including Dylan. For some reason, Allison plays along, and the group, drunk and drugged, hits the open road for a late-night burrito. The trip ends in tragedy; Allison hits and kills a pedestrian in the road, who turns out to be her sister. Stunned, the group scrambles to come up with a plan and eventually decides to cover up their crime, justifying their decision by reminding themselves that Allison didn’t have any friends or future anyway. They dump Lennon’s body in the ocean, while Allison, now in too deep to turn back, decides to permanently adopt her dead sister’s identity.

This central conceit may be soapy, but it opens some genuinely interesting thematic doors. What does it feel like to become the sister who tormented you and (for the sake of avoiding suspicion) to hang out with the people who covered up your own death because they didn’t think anyone cared about you?

The plot seems to offer the promise of a fascinating lead performance too; Lennon, always wearing her Cheshire cat grin, exudes such a wildly different energy from mopey Allison that Iseman’s identical twins appear physically different. What will her performance of Allison’s Lennon impression look like, and can it possibly fool the latter’s friends?

Yet the show doesn’t deliver on these ideas, because it quickly devolves into a poor approximation of a slasher flick. Allison returns home a year after her sister’s death to find a bloody warning in her closet: “I know what you did last summer.” Soon, people start getting murdered, and the surviving members of the gang are left to try to find the mystery killer without revealing their own involvement in Lennon’s death.

It’s disappointing that this plotline overshadows the more interesting questions of identity introduced by the pilot. The new “Lennon” feels pretty much exactly like the old “Allison,” but her friends don’t seem to notice because they’re too busy trying not to get killed.

Worse, though, is the bizarre execution of the slasher plotline. Most of the deaths seem entirely disconnected from Lennon. Some are needlessly gory, while others take place entirely offscreen, but none of them have any real buildup or suspense. It’s like the show couldn’t decide whether to be MTV’s “Scream” or “13 Reasons Why” and ended up in some genre-less no-man’s land in between teen drama and slasher.

“I Know What You Did Last Summer” was probably never going to be anything more than comfort food, but it’s insistence on placing a poorly executed mystery story front and center renders it something less than comforting. The best thing you can say about this show is that you might be interested enough to skip to the end to see what happens rather than quitting altogether after a few episodes.

Watch it: If you’re looking for something mindless to binge and forget (but wait until all eight episodes are out first).

Skip it: if you want something spooky for Halloween.